Too many mistakes from referee Thomson 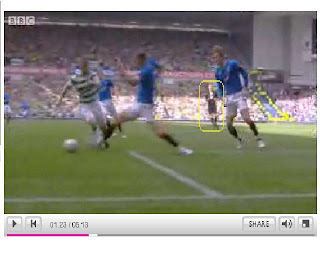 by Joe McHugh Firstly, without doubt Celtic have major defensive problems to iron out. The players, supporters and Tony Mowbray know that, it is what Mowbray is paid to do and judged on.

The defending at Ibrox wasn’t a great surprise, a solid reliable central defensive partnership is the basis for any teams success.

Mowbray will no doubt be pouring over dvd’s of recent games, possible replacements and 30 years experience in the game to improve his side’s defending.

What will the SFA, Hugh Dallas and Craig Thomson be doing to improve the sub-standard display of the referee at Sunday’s game?

MISTAKEN
If they think that a glib apology of sorts within 24 hours of the match finishing will satisfy ‘customers’ who invest millions into the game every season they are badly mistaken.

If the 12th minute penalty incident was Thomson’s only mistake it would be easier to accept, everyone makes mistakes, from bloggers to referees and all sorts of professions inbetween, mistakes are part of our everyday life.

The tone of the apology, or admission, to be more accurate, leaves a lot to be desired. Thomson himself has said nothing, his admission has come through Dallas without any sort of explanation, the statement didn’t even refer to Celtic but the visiting team.

STATEMENT IN FULL FROM DALLAS
“Taking charge of an Old Firm game is both high profile and challenging. Referees are well aware that their performance will be judged on calling the major decisions correctly.

“Craig and I have had our post match de-brief. Whilst I would compliment Craig for his overall handling of yesterday’s encounter, he is disappointed at his error of judgement when he decided against awarding a penalty to the visiting team in the 12th minute.

“Our referees are fitter than they have ever been and our referees are better prepared for matches than they have ever been. We are working each and every day with our top officials to make sure that they are in a position to get the big calls right. However, mistakes are part and parcel of football. I think that it says a lot for the character and professionalism of Craig that he has been more than willing to hold his hands up on this one.”

What exactly was his problem with the incident, pictured above? Thomson had a clear view of it and as he demonstrated throughout the rest of the match he wasn’t shy at throwing around yellow cards for simulation.

His explanation through Dallas provides no insight, from the picture above he should have had a clear view of the challenge.

If Weir didn’t foul Maloney then surely the Celtic midfielder should have been booked?

A decision had to be made but the referee refused. He showed by his willingness to book Maloney and Mark Wilson later in the game that he would book players that he believed had attempted to cheat him into awarding a penalty.

Did he have a doubt over Maloney ‘diving’?

Did he look to his linesman for assistance?

Did he see nothing at all?

Was that the only incident that he reviewed afterwards?

Thomson went on to make a lot of questionable decisions throughout the game. Again in isolation there was no big deal on the other incidents but put into a 90 minute performance when the ball is in play for around an hour it is a worrying level of bad judgements.

Some decisions that could have been given differently.

14min) Maloney booked for simulation, could it have been a penalty and yellow card for Weir and a Celtic penalty?

52min) Could Weir have been booked for a foul on Scott McDonald where he ran his studs down McDonald’s calf?

62min) Kyle Lafferty puts his boot into Zheng Zhi, could that have been a booking on it’s own or for persistent fouling from Lafferty?

66min) Mark Wilson booked for simulation? Horrendous ‘acting’ from the full-back, not in the Eduardo class, or maybe his heels were clipped?

RETROSPECTIVELY
There were other incidents that could be looked at closely and we know that Thomson does like to review all aspects of his performances, as recently as May of this year he requested that the SFA look into a challenge by Glenn Loovens on Maurice Edu retrospectively.

Surely the SFA should be very concerned if Thomson feels that the 12th minute incident was his only mistake of the day.

Just like all those innocent MP’s that mistakenly claimed expenses for mortgages that had long been paid off or for the adult movies enjoyed by their partner everyone makes mistakes, it’s human nature.

If an MP can’t monitor their mortgage payments then they aren’t fit for office, if Thomson can’t make a clear cut penalty decision without Rangers being two goals up he shouldn’t be refereeing.

PROMOTED
The level of mistakes made by Thomson should be a big concern to the SFA who have perhaps promoted the guy way above his level.

Mistakes of the magnitude that were witnessed on Sunday should be kept well away from the prying eyes of Sky Sports and a worldwide audience, it’s little wonder that Uefa and Fifa don’t give a second thought to Scottish officials when it comes to Champions League and major international appointments.

There is nothing that can be done to alter the result from Sunday but a long term demotion of Thomson by the SFA would leave other referees in no doubt that failure to call big decisions in big matches won’t be rewarded.

So what if Celtic had got three first half penalties at Ibrox in front of the Copland Road stand?

APOLOGY
As recently as December 2006 referee Kenny Clark came out with another apology after failing to ‘see’ a penalty at the sam
e part of the ground after Stevie Smith fouled Neil Lennon.

Getting firm with officials who opt out of key decisions should be the priority of the SFA rather than applauding half hearted third party admissions that a mistake has been made.

These decisions don’t even themselves up over the course of a season, I’d think that there is a very good chance that Celtic will be awarded a penalty in one of their next matches, it might even be a marginal decision.

After the apology from Clark three years ago Celtic were given a penalty against Falkirk in their next match, their first penalty of the season and predicted by John Hughes before the game.

Anyone that thinks that a penalty awarded when you are four goals up at home to Falkirk compares with being denied a penalty when one goal up away to Rangers has no idea about the game.

Celtic supporters will look to Mowbray to eradicate the problems in their defence, the SFA should be looking closely at officials who for whatever reason don’t make key decisions.

Thomson’s errors will put every single referee under greater scrutiny than ever, the referee appointed for the January 2 Celtic-Rangers match will be in a lose-lose situation.

Going through every match, decision by decision, isn’t practical and will destroy the concept of refereeing but equally decision making like Thomson’s on Saturday brings refereeing into disrepute.

Unless the SFA take serious action now the problem will continue to resurface and the outside world will wonder what is going on when they look in on the Scottish game.

A third rate, third hand admission does no-one any favours.