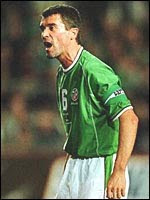 Roy Keane has waded into the controversy surrounding the France-Ireland match by saying that the Irish have no one to blame but themselves.

The simmering anger that has never been far below the surface since Keane walked out of the 2002 World Cup exploded again today at the pre-match media conference apparently to preview tomorrow’s match with Sheffield Wednesday.
After the fall-out with Mick McCarthy in 2002 Keane retained a high level of sympathy and support throughout Ireland as he let rip with a string of complaints about McCarthy and the FAI.
That support has never left Keane through his career moves from Manchester United through to Celtic, Sunderland and now on to Ipswich.
However his criticism of the team that faced France, the defenders and goalkeeper Shay Given in particular, will surely bring about a sea change in opinion with few dissenters in Ireland over the injustice of Wednesday’s KO inspired by the cheating of Thierry Henry.
Keane has never gone with the flow, he has often enjoyed the role of the rebel, but his barbed comments about the events in Paris are likely to push his supporters into a corner that can’t be defended.
COMMOTION
“I’ve been amazed by the commotion over the last few days,” the Ipswich boss said. “Yeah of course Henry handled the ball but I’d be more focused on why didn’t they clear it? I’d be more annoyed with my defenders and goalkeeper than Thierry Henry.
“How can you let the ball bounce about in the six yard box? How can you let Thierry Henry get goal-side of you? And if the ball is bouncing in the six yard box I’d be saying where the hell is my goalkeeper?
“They should have cleared it, the defenders let the ball bounce in the six yard box.
“If that was my team I’d go into the dressing room and I wouldn’t even mention the handball I’d just say why didn’t anyone head it? Defenders have to focus on the players, there is only one ball, just go and head it.
“Where is my goalkeeper? The ball bounced in the six yard box from a free-kick just inside the halfway line, that’s what I’d be asking about not about the handball.
Keane added: “Ireland had the chances over the two games and never took them, in the first game they never performed, in the second half (in Paris) we had opportunities to score and didn’t take them.
DECISIONS
“But it’s the usual FAI reaction, we’ve been robbed, the honesty of the game. There was one of the group matches, I’m sure it was Georgia where Ireland got a penalty it was one of the worst decisions that I’ve ever seen, one which changed the whole course of the game.
“I don’t remember the FAI saying after the game that we should give them a replay.
“There’s a lot at stake, the Irish supporters deserve better, the manager deserves better probably most of the players deserve better but do the FAI deserve better? What goes around comes around.
“France were there for the taking and Ireland never grabbed it, usual stuff, afraid of that next step, mentally not strong enough, they can complain all they want its not going to change France are going to the World Cup, get over it
“I don’t want the sympathy vote, the usual, the usual carry on, boring, bore you to death it would.”
Keane’s comments and the long standing grievances that he nurtures are far from boring, his comments today are likely to make him second only to Henry in popularity terms in Ireland with respect and sympathy for the stance that he took in 2002 likely to disappear as he appears to revel in the misfortunes of Paris.
THIS WEEKEND’S PADDY POWER SPECIALS
Other articles today
Ujpest Dozsa travel to face Vasas tomorrow in their final league game before the winter break.
Willie McStay’s side are currently sitting in second place in the Hungarian league but trail leaders Videoton by six points after losing to Videoton in their last league fixture… CLICK HERE for more
Celtic’s table-topping youth side face Falkirk tomorrow at Stirling University with an 11am kick-off.
Stevie Frail’s side have won their last three league games and are unbeaten in the u-19 league as they complete the first round of fixtures with only the postponed Rangers game outstanding…CLICK HERE for more
Give us feedback