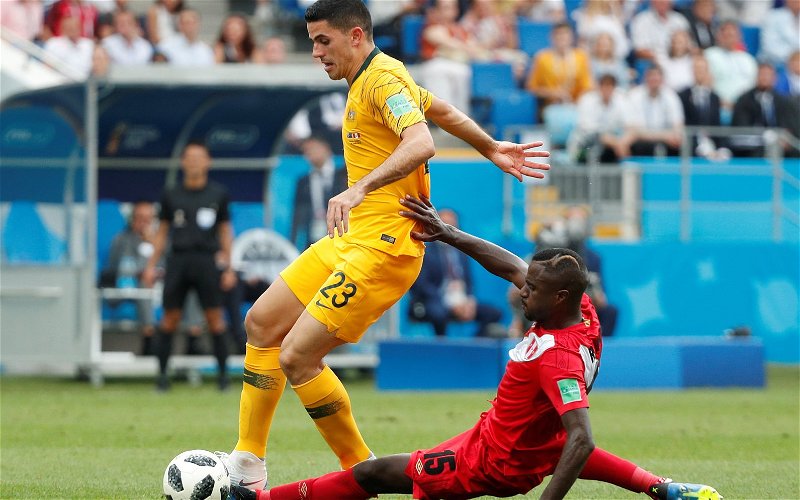 Graham Arnold has issued an apology to Tom Rogic for pulling him out of Saturday’s Glasgow derby at Ibrox.

Rather than playing in a fixture that will engulf Scotland and many pockets of Australia the midfielder will be going through a training session ahead of a friendly against Oman the following day.

The excitement of that kickabout in the dessert, which isn’t even listed as a fixture on the Australian Federation website, is followed by group matches in the Asian Cup against the giants of Jordan, Palestine and Syria who are rated at 109, 99 and 74 by FIFA.

Socceroos boss Arnold has claimed that he is being lenient by not calling up his players on December 24 but that has cut little ice with Brendan Rodgers and the Celtic support.

“I apologise to all the Celtic fans that Tommy won’t play,” Arnold told The Sun. “I have also said sorry to him. I have known Tommy for a long time and I feel so bad for him. Tommy loves Celtic, he loves the derby and he wants to play. I know how big a game this is for Tommy — and I have spoken to him three times in the last few days.

“I can’t let him play but it’s completely WRONG to paint me as the bad guy in all of this. Using Fifa rules, Tom and the rest of the British-based players should meet up with the squad on December 24. Instead, I have let half my squad stay and play in the Boxing Day games — but I can’t do any more. We love Celtic. It’s an incredible club and we have a great relationship with them.

“I coached Tommy as a kid when he was in Australia and helped develop him. I understand that he is one of Celtic’s best players. I understand this is one of the biggest games of the season but I have to make a fair decision for everyone in the squad — and I can’t let Tommy play against Rangers.”

The serious action in the Asian Cup starts on January 20 when the 24 team competition evolves into a 16 team knock-out.

International football is a two way street- by insisting on having Rogic for a friendly against Oman on January 6 Arnold can forget about goodwill coming from Celtic.

Access to Rogic during club dates will be non-existent while Celtic will insist that he is returned to the club that pays his wages if he is injured during international duty.