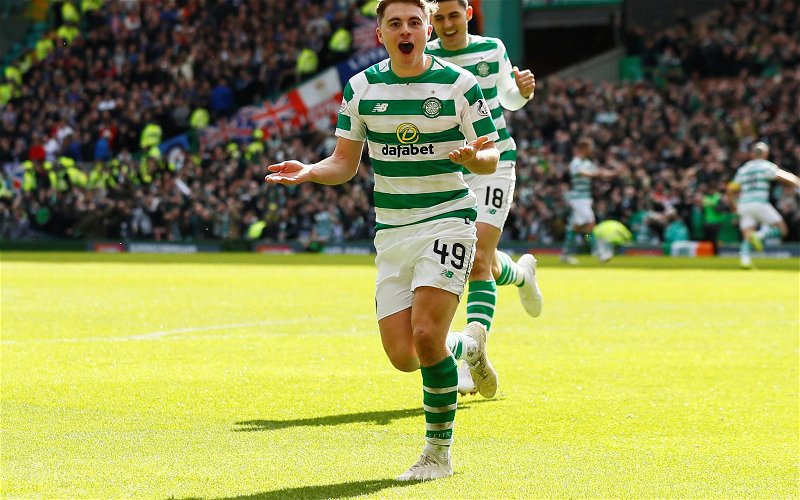 James Forrest has revealed the four names that inspired his early career.

Towards the end of the 2009/10 season the winger helped Celtic to lift the SFA Youth Cup at Hampden then earned a first team call up with Neil Lennon the caretaker boss.

Late on against Motherwell, on the first of May 2010 he was sent on as a substitute to replace Aiden McGeady, scoring with his first touch as Celtic won 4-0.

Robbie Keane had also came off the bench to score with the two Irish internationalists and Shaun Maloney providing the teenage Forrest with all the encouragement and inspiration to reach the top.

McGeady, Maloney, Scott Brown and Keane all moved on but with 16 winners medals to his name so far Forrest is already one of the most decorated players in Celtic’s history.

Reflecting on his debut with The Sun, Forrest said:

I was still polishing the boots when I made my debut. I remember the next day before we started training, I was off cleaning boots — the boots of players I’d played with the day before.

That was good. It was all part of learning how things were done. With someone like John Clark and the other kit men at the club, they made sure the young boys stayed grounded.

Back then, there was a rota, so every couple of days two players out of the team would have to clean every pair of boots.

I really looked up to guys who played in my position, so Aiden McGeady and Shaun Maloney were the main two. Training with them, seeing them playing my position, it was great.

And anyone, no matter what position they played, would say Broony was an inspiration, the character he is.Robbie Keane was playing that day I made my debut, too. It was great training with him, obviously.”

Of the current squad only Brown has collected more winners medals but with five years in hand on his skipper it’s highly likely that the winger will one day overtake his 8-in-a-row captain.