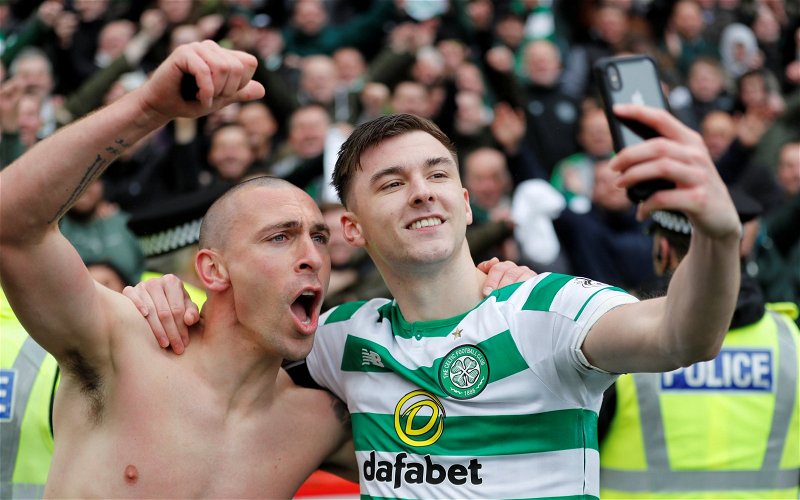 Scott Brown is confident that Kieran Tierney will still be a Celtic player this time next week.

For over a month Arsenal have been linked with a move for the defender with Sky Sports leaking details as the transfer moves ‘ever closer’. The EPL transfer window closes at 5pm on Thursday August 8.

Almost every weekend there is a fresh development towards ‘done deal’ status sparking a 48 hour cycle of speculation before the story fades into the background.

Brown has been through it all before during more than a decade at Celtic and is hoping that his team-mate is soon back in action wearing the hoops as they go for a ninth successive SPFL title.

Arsenal have had two bids rejected for the Scotland left back. The English Premier League transfer window closes on August 8th. pic.twitter.com/fLKN4jc1uO

“He’s fine, he’s just come back from an injury,” he told Sky Sports about Tierney. “He’s looking forward to trying to get himself back into training and get himself back on the pitch as well.

“He loves the club, he knows what the club’s all about and he plays for that jersey every single time he plays so for me he’s done phenomenal since coming in.

Despite a transfer budget widely reported at £45m Arsenal today spent a club record fee signing Pepe from Lille for a fee reported to be £72m.

With club captain Laurent Koscielny desperate to get out of The Emirates it seems that transfer funds will need to be used very wisely to shore up the Arsenal defence as they approach a third successive season without Champions League football.