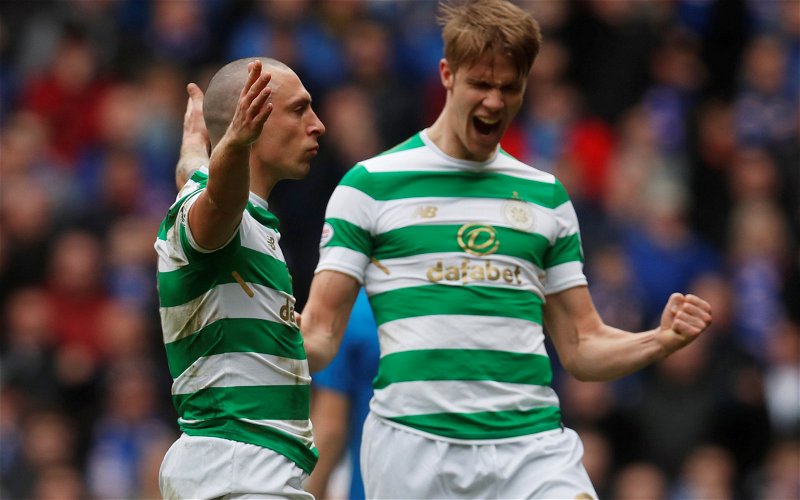 At the age of 21 Kris Ajer has the winning mentality that most players never discover in their entire career.

The Norwegian recently made his 100th Celtic appearance to go on top of 17 at Kilmarnock and 50 plus he made at IK Start to earn his move to Scotland.

Ajer has shown his football ability plenty of times over the last two seasons as a regular in the Celtic defence but some days something extra, something deeper is required. Like yesterday at Aberdeen.

A 1-1 draw on the back on six straight wins in the league may be acceptable elsewhere but with 80 minutes on the clock the young Norwegian saw an opening 80 yards up the park as his direct opponent, Andy Considine struggled to catch his breath.

Ajer set off into that gap as James Forrest took control on the left, the winger moved inside as Ajer left Considine trailing, when the ball came to him in the penalty box he found time to pause then direct his shot around Joe Lewis to turn one point into three.

The sequence was played out in front of Derek McInnes who described the goalscorer as the Norse Horse, afterwards the scorer was happy to accept that compliment with Celtic’s 10 point lead at the top of the SPFL still intact.

Asked about McInnes’ horse comparison, Ajer smiled: “Well, I like to run! So when I get the opportunity to attack I will.

I saw James Forrest had the ball on the left side and, with his quality, I knew he wouldn’t lose the ball. I started running and I screamed for the ball from the halfway line — and luckily, I got it.

We knew that Aberdeen were going to make it difficult for us. They performed really well, but we are just happy to get away with three points. That’s what it was all about.

We went away to a really tough fixture with the conditions and the dry pitch, so we knew we had to play a little bit different.

Aberdeen played their best performance against us, the way they pressed us and played was really good. Was it ever in our minds to settle for a draw? No, never.

As a Celtic player, you’re never happy if you aren’t winning. We always have a mindset to win the game and, at 1-1, we changed the system to a back four to attack more.

Winning is always our target but Aberdeen always perform really well and there is a reason this is such a tough venue. We always come with a belief though that we can get three points away from home. We set up to hurt teams and they made it really tough for us, so we are just happy to win.

After showing his attacking colleagues the way to goal Ajer will be back on his defensive beat on Thursday as Celtic take on FK Copenhagen in the Europa League last 32 tie.