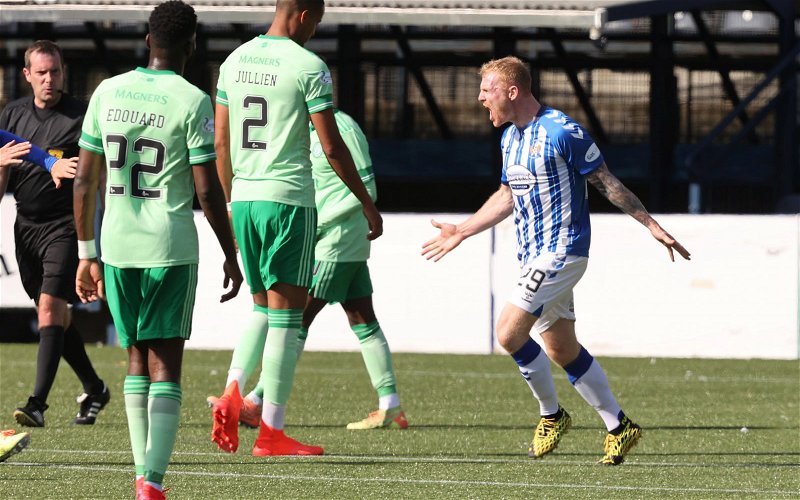 Chris Jullien was the fall guy for Celtic’s 1-1 draw at Kilmarnock.

The Frenchman looked far from comfortable against Nicke Kabamba, hauling down the Killie forward for a penalty that led to the equaliser following Ryan Christie’s opening goal.

Jullien looked uncomfortable throughout with the combination of the plastic pitch and the physical play of Kabamba making life difficult.

Midway through the second half Jeremie Frimpong was replaced by Hatem Abd Elhamed as Celtic switched to a back three.

Celtic enjoyed 70% possession throughout the match but only managed two attempts on goal, one of them being Christie’s free kick in the 11th minute.

After the match Neil Lennon refused to blame Jullien for the dropped points, pointing out that he started last season slowly as well before becoming a major influence on the title winning success.

There isn’t much time to turn things around with Celtic away to St Mirren on Wednesday with the match kicking off at 6pm.

Absolutely pathetic from start to finish, in a season that we can’t afford to be dropping points especially against teams like this, big game players gone into hiding, embarrassing

We need a Decent cb ASAP. And Brown lasting 79 Minutes was Crazy

Absolutely dire today. Slow build up, costly mistake and it was like we were playing a friendly.

Absolutely horrendous as per down there, offered nothing and deserved nothing. Julien bullied as usual, whilst everyone else was sub standard

Not totally blaming pitch but it play a small part, jullien & Ajer looks awful at back . Widemen none existence . Clueless when we got too box

Anyway the bottom line is big Jullien cost us the points with an absolute honking performance and comical defending.

We spent £7m on Jullien and reportedly Ajer is worth £30m. We are playing Kilmarnock with a team worth buttons and your answer is spend more ?
Bad day, poor pitch. Panty wetter. Calm doon

Abysmal. So called creative players offered nothing. Worrying performance from Celtic today, nothing on display of any merit at all. As bad as Jullien’s penalty was, the failure of eye catching players to perform, was worse.

1. we need a centre back. both jullien and ajer are not good enough when dealing with one on one situation. 2. lennon should have made changes earlier. ntcham should have come on earlier, he made the build up play quicker with his better passing vision.