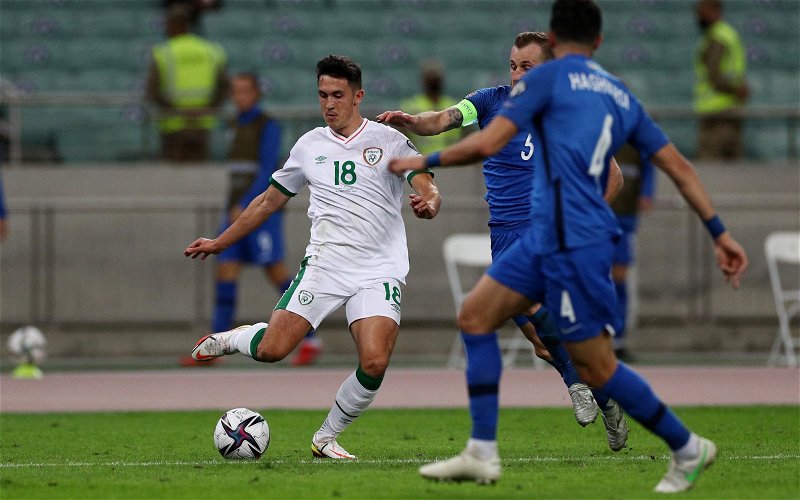 Jim Goodwin has been touting Jamie McGrath to join a major club- six months after telling Celtic that they should be signing the St Mirren midfielder. In-between times the 25-year-old has become a regular internationalist, playing for Ireland against Portugal, Serbia and Azerbaijan this season.

St Mirren signed Goodwin from Dundalk in January 2020 with the midfielder making an instant impact including 17 goals last season for a club that finished in the bottom half of the SPFL Premiership.

At the end of the summer transfer window only red tape prevented a last minute move to Hibs going through with Scott Allan heading to Paisley as part of the package.

McGrath is out of contract at the end of this season with Goodwin realising that a new contract has to be agreed shortly or the club looks for a transfer fee in January.

I did stress to Jamie over the summer not to be disappointed about that the moves didn’t happen because it might be a blessing in disguise.

No disrespect to the clubs involved in the summer, but I believe come January there’ll probably be another six or seven really big clubs interested. That’s credit to Jamie.

The kind of character he is, he could have thrown his toys out the pram when the deal wasn’t allowed to happen but he’s got on with things. He’s shown he’s willing to give his all for our jersey while he’s here.

We’ve made an incredible offer to Jamie, we need to make that clear. We’ve made him an offer we’ve never made a player in the history of the club but we’re not stupid. We know he’s going to have numerous other offers and no doubt someone might come in and blow us out of the water.

We want Jamie to know exactly what we think of him and reward him with a great contract. Whether he takes it or not, it’s up to him but our supporters need to know we’re not giving up hope just yet.

Back in April Goodwin told The Sun:

For me, Jamie McGrath is a Celtic player. I look at some of the lads who are there now, like David Turnbull, Callum McGregor and Ryan Christie.

I can see Jamie being among that level. I don’t want him leaving and going down to League One in England because they might double his money.

If he’s going to leave I want it to be a top club that’s going to compete and win things, and help him progress and take his game to the next level.

Despite losing Scott Brown, Ryan Christie and Olivier Ntcham during the summer the only midfielder that Celtic brought in was James McCarthy.