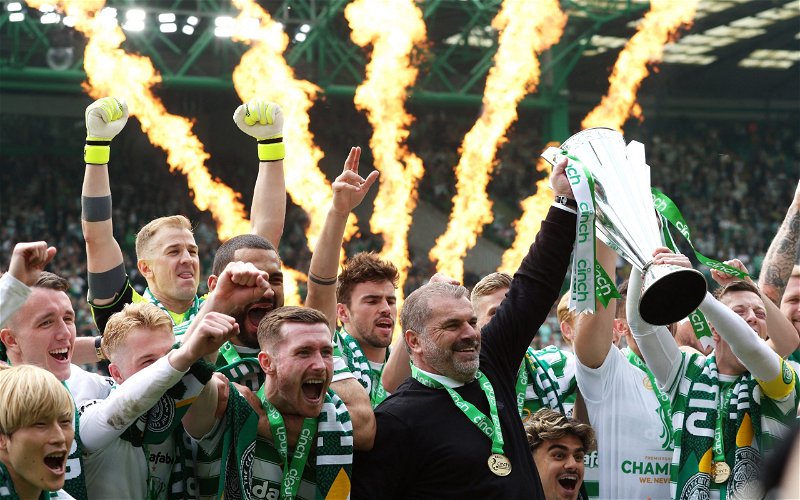 Hugh Keevins is getting brave again with letters.

On 1 August 2021, after Celtic had lost on dubious circumstances to Hearts at Tynecastle the veteran shock jock announced to Daily Record readers:

At the very least we now know what the Ange in Ange Postecoglou stands for. Absolutely. Not. Good. Enough.

For a month or so he could repeat that claim as a badge of honour but then Celtic got on a winning run. His claim/wish that Celtic would finish behind Aberdeen in third place was wearing thin before the Dons board decided that it was Stephen Glass who was Absolutely. Not. Good. Enough.

The guy from Australia saw off the might of Steven Gerrard and Giovanni van Bronckhorst to deliver the SPFL Premiership title and the League Cup.

Doubling down Keevins has tipped Celtic to lose the title this season, apparently it is a game of pass the parcel that one club has held onto for 10 of the last 11 years.

Now, 364 days after Celtic’s last defeat in the SPFL he shows off  in the Record with:

The stigmatised strip we will call it. Taking advantage of the freedom of expression now being so readily embraced by Souey, I would say Celtic were guilty of complacency, ragged, arrogant and presumptuous. And I’ll let you put the first letter from each of those four words together to form a shorter, sharper assessment.

As a man of letters the Daily Record columnist is something of an expert on that subject, what Celtic’s league position says about the 11 teams below them in the SPFL Premiership probably isn’t fit for a family newspaper.