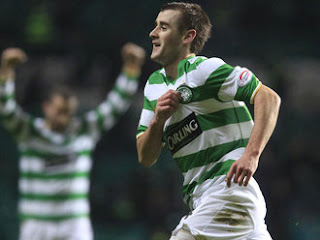 Is Niall McGinn at the stage in his Celtic career where he has to become a regular starter?

Other than Landry N’Guemo and Aiden McGeady, the former Derry City winger looks to be the only Celtic player currently on top of his game and playing with confidence.

The more match time he gets the more effective he becomes. Despite missing a few chances today he kept on making himself available and worked the ball well from his left side onto his favoured right before scoring with conviction.

With N’Guemo about to leave for the African Nations Cup there will have to be some changes to the midfield with McGinn as a starter becoming a serious option.

The main obstacle to McGinn becoming a regular would appear to be McGeady, or more accurately, McGeady’s role in the team. Starting with both players on the wings would give the side more of a 4-2-4 formation that 4-4-2 but with N’Guemo missing for most of January perhaps it might be an option to give Aiden a more central role, or his Co-Operative Cup Final role as he successfully defined it.

After his goal against Hamilton McGinn said: “There was a bit of nervousness and so it was important to get our second goal.

“Hopefully that will make the manager think about his team over the next couple of weeks. I feel I am getting fitter, becoming a better player and my confidence is on a high.

“So far my season has been unbelievable and hopefully soon I will be in the starting eleven, week-in, week-out.”

The debate between the glass half-full and half-empty camps after today’s display will be lively but it depends on your starting point as to the view that you take.

Not surprisingly the defence remains a major concern. After some promising early season signs Artur Boruc is back looking unpredicatable and was badly caught out at the disallowed Hamilton goal while no central defensive partnership has looked convincing.

The Georgios Samaras debate could go on forever. There’s no doubt that he has great skill and has moments of inspiration but in his current role he’s as much a wide player that pushes forward as he is a striker. Against Hamilton Accies at home Celtic need as many strikers as possible with Scott McDonald looking isolated and frustrated in equal measures.

Marco Fortune was much more like the striker we’ve been hoping for. He’s more direct than Samaras, playing on the shoulders of defenders and after hitting the woodwork again today he looks capable of going on a serious scoring run.

Everything about the season hinges on January 3, providing that Kilmarnock are safely negotiated on Wednesday.

Two wins from our next SPL fixtures before the break for the Scottish Cup would give time for any January signings to be settled in for the less testing home match with Falkirk on January 16.

The Rangers game is the priority with McGinn hopeful that his performance today has edged him closer to his first big match start.
He added: “My only low point was not being involved in the Rangers game at Ibrox.

“If I get a start against Rangers on January 3 I will be more than ready. It’s another challenge I relish and even if I’m on the bench I can come on and make an impact.”

He added: “But it was important to get the three points today to close the gap on Rangers, so hopefully Hibs can do us a favour by pulling off a win or by getting a draw, which will also be a good result.

“We also need to win on Wednesday night against Kilmarnock to make sure we go in the Rangers game on a high.”