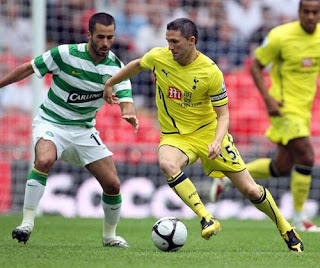 Will an undercover, unwelcome, unofficial Spurs Christmas party spell the end of the road for Robbie Keane at White Hart Lane?

There will be merry hell today at Tottenham’s training after Harry Redknapp spits out the Corn Flakes after reading The Sun’s blow by blow account of his players ‘golfing trip’ to Dublin last week.

I’d be amazed if a cunning old fox like ‘Arry didn’t have a minder or two keeping tabs on things as the Robbie Keane inspired event unfolded.

But will it force open the door to take Keane to Celtic and finally end the longest running rumour in football?

When The Sun does these stories they do them very well, there is no kite flying with dates times and venues given in detail as the Golfing Hotspurs chased birdies with concentration that would impress Tiger Woods.

Coming three days before the surprise home defeat from Wolves the timing couldn’t be worse with Redknapp stating repeatedly his dislike for the boozing culture within football.

Days after the event Redknapp was spelling out exactly his thoughts on the great no-no of Christmas parties for footballers.

He said: “The only advise that I have about Christmas parties is don’t have one.

“I don’t see the point because they are nothing but aggravation for everybody.

“Everyone’s waiting for you to trip up, go out and get drunk and act silly. You don’t need that.

“This is a busy period, a working period. Why should we have Christmas parties? Every year there is aggro at every football club that has one.

“If they (the players) tell me that they are having one I’ll tell them that they’re not having one.”

There is no suggestion of anything untoward at the ‘golfing trip’ but with their manager stating publicly his opposition the players involved, and organiser in particular, will have some explaining to do.

An old fox like Redknapp probably knows more details about the event than The Sun reporter but being challenged publicly will be the issue for the Spurs boss.

The ‘Keane for Celtic’ rumour failed to surface last year but has been gaining momentum over the last few weeks with a loan deal suggested as a solution for all three parties, pardon the pun.

Speculation will intensify over the next few days but with Paul McGowan on the goal trail Robbie could find himself as fifth choice striker should he get the green light to wear the hoops!
The Sun story