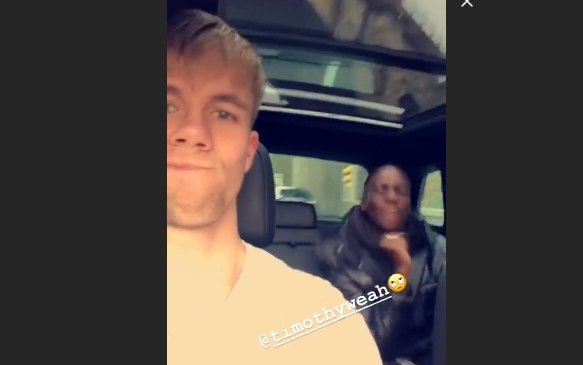 Kris Ajer looked less than impressed by the back-seat dancing of Timo Weah in an Instagram video.

The young Norwegian defender was in the passenger seat as some modern tunes were played out on the journey to Lennoxtown to the delight of one of his team-mates.

Weah looked like he was still celebrating from his 19th birthday on Friday but it made little impression on his defensive team-mate.

On Thursday night the on-loan Paris Saint Germain forward watched Celtic’s Europa League defeat from Valencia for the bench but will be looking for a return to action tomorrow against Motherwell.

After playing the majority of that match down to ten men Brendan Rodgers is expected to make a couple of changes for the visit of the in-form Lanarkshire side who have won their last six SPFL matches.

With Hearts and Hibs following over seven days the hoops face a vital time for their treble ambitions.