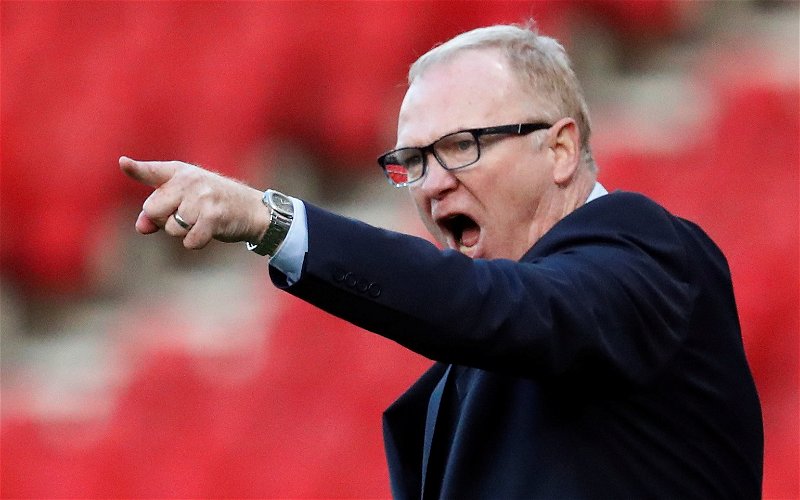 Alex McLeish was involved in a ‘deeply troubling episode’ ahead of Scotland’s 2-0 win over San Marino on Sunday.

Underneath the headline of today’s Daily Record story there are very strong hints pointing to concerns about the health of the international manager.

Even before he was appointed as Scotland manager 13 months ago fans were highlighting McLeish’s appearance and how he was struggling to retain a role in television debates.

As a former manager of the old Rangers club and ex Scotland boss he kept a fairly low profile other than touting himself for jobs at Ibrox whenever a vacancy appeared.

Deflecting attention away from the results the Daily Record reports:

Maxwell has chosen to move swiftly amid growing concerns McLeish is struggling to cope with the stress of attempting to lead the national side to a first major finals in 22 years.

McLeish , who turned 60 in January, looked physically drained after seeing his side go down to a 3-0 thrashing at the Astana Arena last Thursday in a Euro 2020 qualifier that has been described as the single worst defeat in Scotland’s pot-holed history.

Specifically, there was what is being described as a “deeply troubling episode” ahead of Sunday’s error-strewn 2-0 win over the lowest-ranked side in the world which has helped to convince Maxwell that McLeish’s health is being adversely affected by the ferocious intensity of the job.

It seems unlikely that any health or stress issues only came to light after McLeish took on the Scotland job.

The decision to remove him from the job seems to be driven by SFA Chief Executive Ian Maxwell who will now be expected to produce an upgrade as McLeish’s replacement.