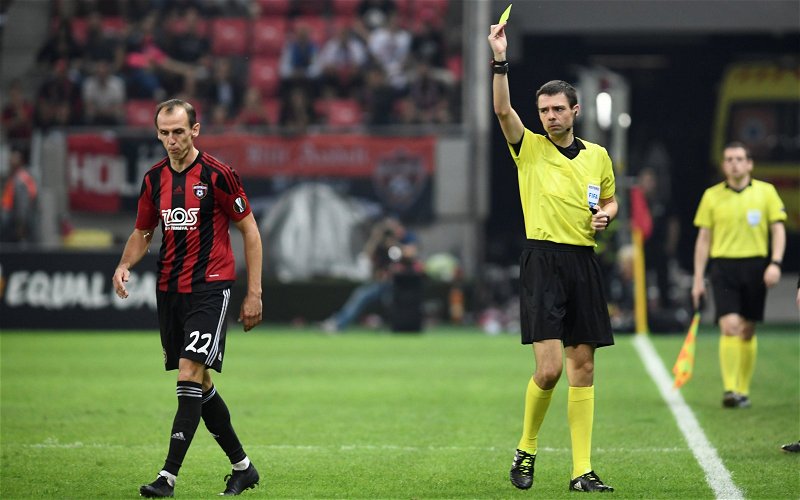 Radio Scotland invited Hugh Dallas on to their Sportsound programme- and failed to ask any questions about Kevin Clancy’s horrendous display at Easter Road.

Celtic were denied two penalties that almost every pundit in the Scottish game felt should have been given with the match referee and his assistant, Alan Mulvanny, both having a clear view of the fouls on Ryan Christie and Mortiz Bauer.

Sportsound on air with @mstewart_23 and former @RangersFC player Steven Thompson. Following their 5-0 thrashing of @AberdeenFC on Saturday Sheyi Ojo has backed up his former claim that Gerrard’s side are the best in Scotland. And former ref Hugh Dallas on standards in the SPFL.

Dallas was introduced to the discussion after they repeated commentary from Easter Road but was allowed to revert into a general defence of referees going on about the difficult job that they have and getting more decision right than wrong.

After a joke about refereeing matches involving Steven Thompson the discussion moved on to VAR. Despite it being in use in Cyprus and Malta funding is being put up as the reason for delaying the introduction of VAR in Scottish football.

During the close season Andrew Dallas stood down from the FIFA list but is still a regular with the top match fees from SPFL Premiership fixtures.