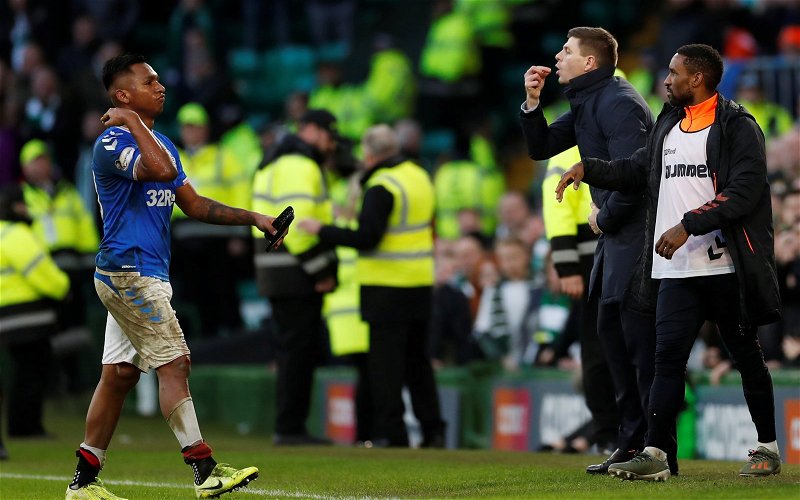 Rangers have turned to the race card to defend Alfredo Morelos.

The Colombian striker was sent off during yesterday’s Glasgow derby after returning from the suspension he picked up against Motherwell for a red card a fortnight ago.

In the 84th minute of the match he was booked for a foul on Scott Brown then given a second yellow card for simulation in stoppage time.

After the match Steven Gerrard made no mention of any racist abuse of his striker but with further punishment expected from the SFA for a ‘slit throat gesture’ the Ibrox club have opted to play the race card.

A Rangers spokesman said: “We believe Alfredo was racially abused and we would expect now that all measures will be taken to identify and deal with those responsible.”

Celtic released a statement saying: “We are aware of the gestures made by the player towards Celtic supporters. We have received no reports of any racial abuse but would fully investigate any should these be brought to our attention.”

Morelos was sent off on his previous visit to Celtic Park in March and has now been sent off seven times in the last 17 months. Twice against Aberdeen and twice against Celtic. Yesterday was Morelos’ fifth match at Celtic Park with no previous reports of racism.

With a serious allegation made against the Celtic support it remains to be seen if the board will stand up for the fans.

In April 2017 two fans were captured on television racially abusing Scott Sinclair at Ibrox, both clubs, the SFA, SPFL and Police Scotland took no action.