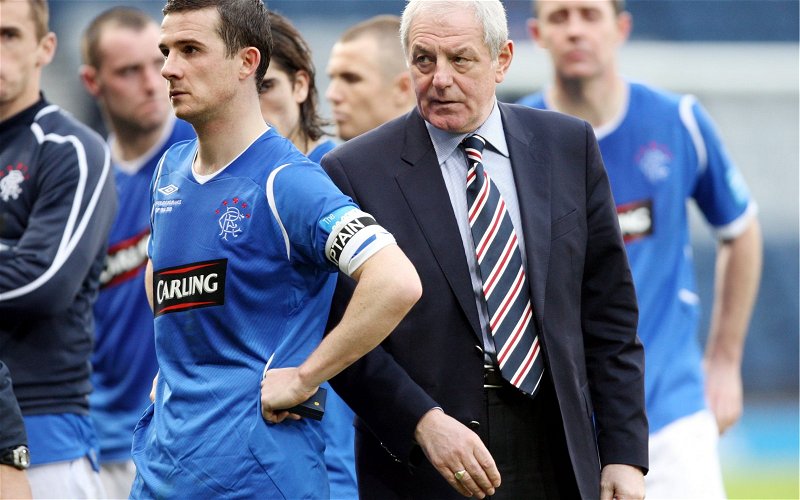 After going round the houses Barry Ferguson has finally admitted that the SPFL title race is over.

The former Rangers skipper had pinned his hopes on an away win in the Glasgow Derby but a draw leaves Celtic four points from claiming the title with three matches left to play.

A win over Hearts on Saturday would mean that Celtic’s points tally couldn’t be beaten and take the goal difference buffer to at least 20.

That all points to a green and white title party at sometime over the next fortnight, as Ferguson finally admitted in the Daily Record:

I’ve not got the blue-tinted specs on here, honestly, but Rangers were the better team after the break and if anyone was going to win it, they were.

It didn’t happen and they’ll have sat in the dressing room disappointed that they didn’t get the three points.

There will be some people who might be thinking that getting a draw at home of your rivals, when a win for them would have clinched the league title in everything but name wasn’t the worst result for Rangers.

But top players don’t think that way. The Rangers players will know the game was there to be won in the second half.

Celtic looked rattled after Sakala’s equaliser. They were all over the place for a spell but Rangers couldn’t put them away.

They’ll know a win would have put a bit of pressure on Celtic. Yeah, the likelihood is that the title would still end up at Parkhead, but if the gap had gone to three points and with Hearts next up for them, you just never know.

That’s why Gio’s men will have left there frustrated. They’ll know it is over now.

At the start of the year Celtic trailed Giovanni van Bronckhorst’s side by six points but after three Glasgow derbies it is the hoops that have a six point advantage going into the last three matches.

An unbeaten run consisting of 24 wins and five draws stretching back to September has put Celtic into top spot with two of their last three matches at home.