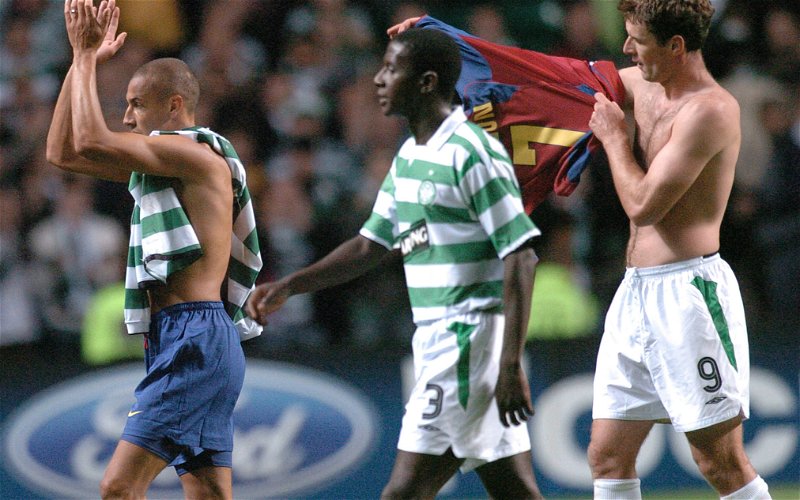 Chris Sutton has revealed that a Henrik Larsson Barcelona shirt has top billing in his memorabilia collection.

During the nineties the striker was one of the biggest names in the EPL as he moved from Norwich to Chelsea via Blackburn Rovers where he won a title alongside Alan Shearer.

In July 2000 he moved to Celtic to play a key role in an incredible period of success with his partnership with Larsson celebrated to this day.

For four years the two men were at the forefront of Martin O’Neill’s fearsome side but it was after the Swede left that Sutton got a special memento.

I’ve got a couple of Celtic shirts too. I’ve got the one from Seville [UEFA Cup final] and one from the treble-winning season. And they mean the world to me, but they all have equal value to me because they’re all part of my football journey so I don’t have any favourites in that respect.

If I had a favourite shirt it would probably have to be the one I swapped with Larsson when he came back. He was a better player than me so to have his shirt means a lot to me because of my relationship with him. I had so much admiration for him and, you know, that was the only game we lost at home in the Champions League under Martin O’Neill and it was sod’s law that he came back and scored for Barcelona

Larsson signed off for Celtic with a double in the 2004 Scottish Cup Final against Dunfermline, in September of that year he was back in Glasgow in Champions League business, coming off the bench to score for the visitors in a 3-1 victory.

Henri Camara and Juninho were brought in to replace the Swede but neither made any real impression as O’Neill turned to John Hartson to join Sutton in the Celtic forward line.