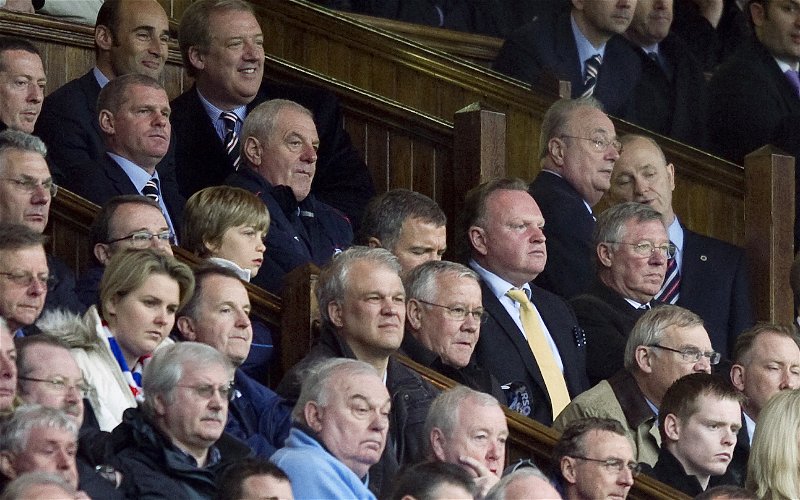 Rangers Tax Case has called out The Times (Scotland) after HMRC settled the sum owed to them when Rangers Football Club went into liquidation in 2012.

For years under Dave Murray and Craigy Whyte the club claimed that everything was perfectly legitimate and that they would defend the scams used to sign players that they otherwise would not have been able to afford.

As well as defrauding HMRC, Rangers cheated every other club in Scotland by paying players through offshore trusts against the rules of the SFA and SPL. All payments to players have to be on the contracts registered with the authorise.

For a decade token contracts were forwarded to the SFA and SPL while players had massive sums paid into their trusts without deduction of Income Tax or National Insurance.

Eventually the scams became overwhelming, administrators were appointed and attempted to estimate the size of the various overdue tax bills. While fans of Motherwell, Dundee, Livingston, Hearts and Dunfermline rallied together to achieve a CVA Rangers fans kept their hands in their pockets as they consoled themselves in bizarre conspiracy theories that a dastardly plot had been hatched to kill off their institution.

The Times and others played along with that narrative, Whyte got plenty of stick but after Murray told his favoured journalists that he had been duped by a billionaire from Motherwell there was only sympathy for the Edinburgh based businessman who continues to hold an incredible grip across Scottish society.

Hi @magnusllewellin
Remember that big exclusive about HMRC getting its sums wrong?
The inference that Rangers could have settled their tax bill and might still be alive today? https://t.co/ArQ7neWvNK

On 14 November 2019 The Times exclusively revealed:

A multimillion-pound blunder by the tax authorities is being blamed for the financial implosion that wrecked Rangers Football Club and sent shockwaves through the sporting world.

Up to £50 million is set to be wiped off the tax bill owed by the Ibrox club’s old operating company after HM Revenue & Customs acknowledged it had claimed for too much, The Times can reveal.

Accountancy sources now believe the outstanding bill for using an offshore trust to pay Rangers players and staff is likely to stand at the far more affordable figure of £20 million. That is equivalent to £2 million annually for the 2001 to 2010 period the tax avoidance scheme was in place.

Seems like the lads at The Times conveniently decided to ignore the overdue ‘Wee Tax Case’ of £2.8m plus interest from the scams used to entice Ronald de Boer and Tore Andre Flo and the £10m held back during season 2011/12 that led the club into administration followed by liquidation when Her Majesty rejected a CVA.

Through a variety of tax scams used to try and remain competitive with Celtic, Her Majesty lost out on £56m from the sources that other competitor clubs deducted and paid during more than a decade when Scottish football was rigged.

Just to jog his memory ? pic.twitter.com/kse5FrHkYA

The penalty bill sent to Rangers was of a magnitude consistent in HMRC regulation with deliberate non-payment of tax i.e. fraud.

Why no prosecutions?
That would require the same police and COPFS to go after the people who brought them 9IAR and other trophies.