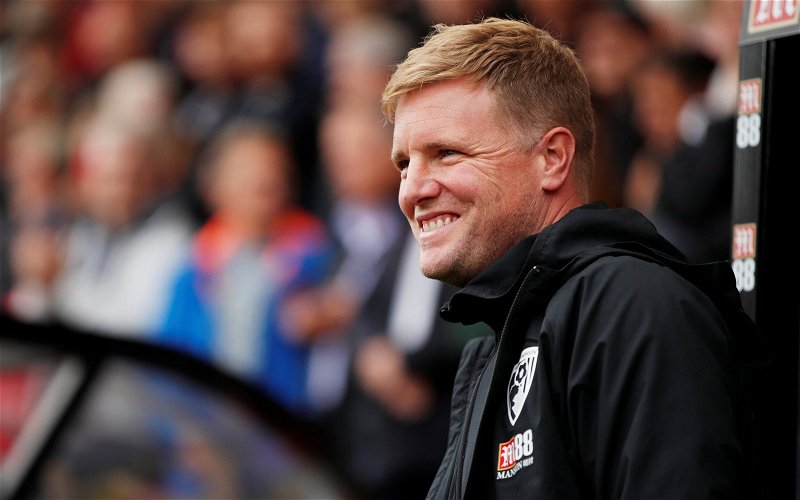 Michael Gannon of the Daily Record has dropped a strong hint that Eddie Howe may still be on the payroll at Bournemouth.

The 43-year-old is the strong favourite to become the next Celtic manager but after reports that he met with Dermot Desmond and Dom McKay the trail has gone quiet over the last week.

Howe was under contract with Bournemouth until June 2021 but resigned last August when they were relegated from the EPL.

With EPL managers apparently on contracts worth at least £2m a year it is very rare for anyone to resign- effectively walking away from the richest deals in management.

Howe may have come to some sort of arrangement with Bournemouth knowing that after eight years at the club he was going to give himself a season out to prepare for a fresh challenge.

Gannon made the suggestion during the Daily Record Celtic Podcast with Chris Sutton quick to leap on it suggesting that the Record reporter might be holding back some more detail.

Gannon: I think with Eddie Howe it is more legalities and the finer points of contract details. I think that Eddie Howe will be at Celtic in the summer, I suspect that he might still be on the wage bill at Bournemouth and why pay 400 grand to get him out early when the season is done. He could be working away in the background, contractual.

Sutton: Oh, what do you know Mick?

MG: I’m just surmising, I’m only surmising. These matters won’t be discussed because it is contractual matters and they are highly private. There is also Richard Hughes, that angle as well. Richard Hughes was a Premier League Technical Director on a good wedge as well, would he get that at Parkhead? That’s another good part of the budget that Celtic are looking at, that they didn’t actually plan for. There’s wee things in the background going on like this that cost a lot of money but maybe in the longer term will get ironed out

MG: The noises coming out of Celtic are positive at this stage, it’s close, they are optimistic. All these sort of warm, fuzzy phrases.

Last Saturday Gannon broke the exclusive news that Celtic had contacted the SFA for clarification over the long delay in dealing with five Ibrox players compared to the quick turnaround in postponing Celtic matches and suspending Boli Bolingoli.