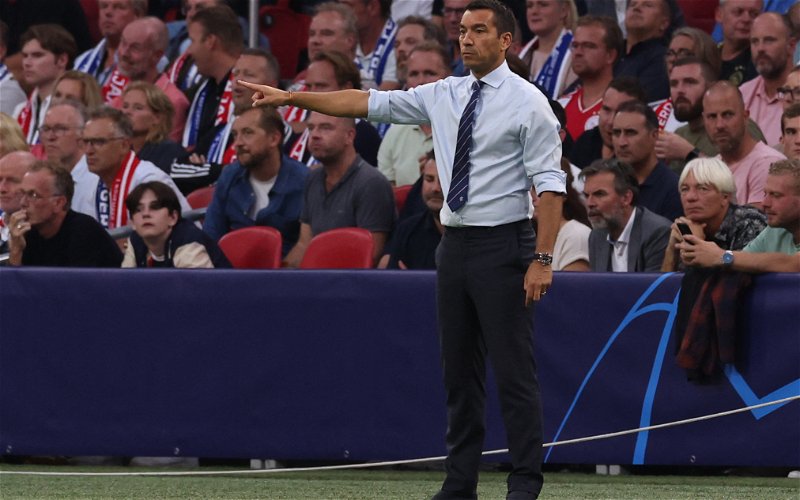 The Dutch media weren’t slow to call out the performance turned in by Giovanni van Bronckhorst’s side in Amsterdam.

Fresh from knocking PSV Eindhoven out in the Champions League qualifiers Ajax were expected to face a tough test in the opening group match.

A few months ago van Bronckhorst’s side had won away to Borussia Dortmund with that performance sending them on the way to the final of the Europa League.

After getting hammered by Celtic on Saturday a backlash was expected, instead a gutless performance was served up that presented Ajax with the points while harming the reputation of van Bronckhorst as a competent coach.

Picking up on the reaction from Holland, The Sun reports:

Reporter Mike Verweij described it as a “beautiful result” for Ajax that gave them a “dream start” in the Champions League this season.

While it was kind words for Ajax, it certainly wasn’t for Rangers who were torn to shreds. He brutally labelled Rangers as “drunken Scots.”

He said: “After a short scanning phase, the team from Amsterdam set off in the atmospheric Johan Cruijff ArenA.

“The opening goal of Edson Alvarez, who headed in after seventeen minutes from a corner from Steven Berghuis, was the signal for a gala performance. In it, the drunken Scots were lucky that it was ‘only’ 3-0 at half time.”

Another outlet, AD, noted how Ajax fans chanted at former rival boss Gio van Bronckhorst to ‘take your rubbish with you’ as the game came to a close.

Their match report also noted how Rangers were “overwhelmed” by the Dutch giants, with James Sands and Connor Goldson blasted for giving Edson Alvarez space to head in the opening goal unopposed.

Next Tuesday van Bronckhorst gets the opportunity to put things right when Napoli visit Ibrox.